One in Eight Installation Exhibition 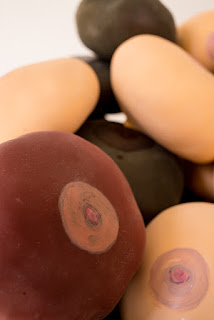 The inspiration for One in Eight came about when my mother was diagnosed with breast cancer in 2014. I’ve been working on the installation ever since. Over the years the concept has evolved and grown much like how cancer does in a persons body. What remained constant throughout the installation’s evolution is the percentage.

It is estimated that one in eight women born today will be diagnosed with breast cancer at some point in life. Through census research in 2013, approximately 160,593,450 women live in the United States; twenty million or one in eight of those women are destine for breast cancer. The disembodied breasts in this installation represent this statistic. There are a total of 160 latex breasts varying in flesh tones representative of the different ethnicities of women found in the United States and abroad. Breast cancer does not discriminate nor is it limited to one country. It is a global disease that affects both men and women; although the percentage of men who die from breast cancer is much smaller. A rare occurrence, less then one percent of all breast cancer cases develop in men and only one in a thousand men will ever be diagnosed with breast cancer. And so this exhibition focuses on the one in eight women who will be affected by this terrible disease.

The installation began with the idea of using flesh colored latex balloons filled with three different materials, flour, pepper and marbles with the nipples painted on with oil paint.  The balloons fill with flour only represented the uninfected breasts. The marble mixed with the flour represents the discovery of the lump, one of the possible signs of breast cancer.  And finally, the flour and pepper combination, which is not nearly as obvious, is symbolic of my mother’s experience.

Similar to the destructive nature of cancer, over the months I discovered that both the pepper and the oil paint had a corrosive effect on the latex; each ate through the skin of the balloon exposing the flour and destroying the breast. Another discovery pertaining to the fragility of the latex occurred when I realized that by blowing up the balloons for the purpose of stretching them, they then became more prone to breaking. Originally the idea was to have the installation be an interactive one, where viewers could touch and squeeze the breasts to identity which ones were cancerous. The now fragile quality of the latex aligns itself with the sensitivity and tenderness of a woman’s breast as well as the emotional vulnerability experienced by a woman diagnosed with the disease. These revelations were disclosed through the creative process, which evolved as a response to these discoveries.

Another part of the installation’s evolution is the inclusion of the laundry basket that holds the dismembered breasts. It is a reference to the idea of ‘dirty laundry’, the shame, discomfort or embarrassment some women experience emotionally when discussing their diagnoses. The breasts are piled in a discarded manner, separate from the individual yet held in a container that is historically associated with a woman’s role in the home. It is a symbol of the emotional burden that weighs on the woman diagnosed with the cancer, as are the anonymous breasts that fill the basket.

Accompanying the laundry basket and its contents, are black and white photographs of eight women. These women, a variation of age and ethnicity, surround the basket and represent the statistics of one in eight. Similar to the women that fill our lives, we cannot visibly tell which one has been diagnosed with breast cancer. They could be our mothers, grandmothers, friends, sisters, daughters, aunts, wives, and or the stranger we pass in the street. These women represent the fact that no one is immune from breast cancer – even if we ourselves do not or will not get the disease we know someone who will or does. Breast cancer affects all of us.

This exhibition is dedicated to the survivors and fighters of breast cancer and to my mom, Terri Carey, who is my heroine.