Although it's been a week since my last post, I have been busy working in the studio! I've got two bodies of work going, the One in Eight installation is progressing (will post more on that tomorrow - hopefully) and the Vagina Slipper series. Just to recap... whenever a concept develops into a body of work be it an installation of series destine for an exhibition, I create a stand alone sketchbook for that single concept so that all experiments, explorations, discoveries and failures are housed in one book. So today's post is on the Vagina Slipper Sketchbook! 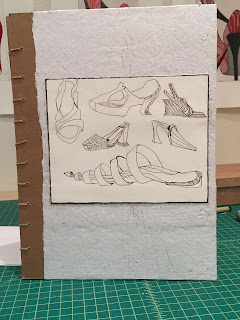 As far as the 'Coptic' binding goes I think this is the best one I've done to date (for those unfamiliar with bookmaking that is the stitch used to bind the book - you can see it to the left). For the cover of this sketchbook, I used handmade paper made by my industries husband Andy (in his genealogy research he discovered he has ancestors that were papermakers so he's set out to learn how to make paper! This will also come in handy when he and I start our collaboration on printmaking... slatted for the distant future as we are still saving up for a printing press). Then the drawing of the shoes I did over the weekend. The drawing was intended for the cover but as I was drawing I realized I liked some of the shoe designs so I might end up using some of those designs in the 'Vagina Slipper Shoe Collection’, which is currently under production. BTW... the brand name for the shoes is VulVa! Yes indeedy... in addition to making the ceramic shoes, the plan is to create a series of poster advertisements for the collection! I was also tossing around the idea of making my own shoeboxes!
But first the shoes... 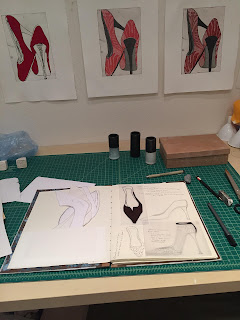 Because I have my ceramics class on Wednesday evenings I've earmarked Wednesdays as a studio day focusing on Vagina Slipper collection. Here you see two possible shoe designs in the sketchbook using the same shoe template as the Ruby Red Slippers that are in progress in the ceramics studio at the League. The shoe that is the sketch in black at the top of the page is tentatively titled The Velvet Slipper. The stiletto sandal at the bottom right has yet to be titled nor as the polka dotted pump located at the lower left.

The three bud vases between the sketchbook and the wall with the shoe prints are actually glaze tests I did in order to both understand the glazes better and to figure out what glazes might be useful in this collection. The first vase (going from left to right) is a combination of glazes. Both are Cone 10, the top is Black Satin and the bottom is Koryo. The next one, also Cone 10 is all Black Satin and the last one to the right is again Cone 10 with Black Satin on time and Buttermilk on the bottom. Currently my thought is to glaze the Velvet Slipper in black satin, wipe the interior down (where the vagina will be located) and do a light glaze of the koryo over it. I'm thinking of doing both the stiletto which also happens to be polka dotted and the other pump (also polka dotted) using a black porcelain slip as the base and the to create the polka dots which will be raised (so both shoes' exterior surface will have an added three dimensional quality to them) with white porcelain slip, then put a glaze of Christine's Clear over it to seal the slip and clay. But... I want to do two more testers experimenting with the process before I have at it on the shoes... I can still construct the shoes, but I will just hold off on the glazing until I've tested out the color/pattern ideas on the vases first. Since I'm currently a free agent (meaning I don't have gallery representation at the moment) I don't have to rush to complete this body of work, which gives me the opportunity to work more slowly, taking risks and discovering what can and can't be done and or how it can be implemented! As my ceramics instructor says "poco a poco"... this has actually become my mantra as of late!

Oh... and the red shoe prints on the wall were printing experiments I conducted while attending a printmaking workshop last summer up at Anderson Ranch in Snowmass, Colorado! My intention is to turn these two dimensional shoes into the three dimensional Ruby Red Slippers you saw under construction last week! If you zoom in on the prints you can also see the subtle marks that make up the vagina! The goal is not to be 'in your face' with the imagery but instead to cause pause and hopefully start a dialog on the topic of the series/body of work. Research on said topic will start up again next Wednesday if not sooner. I have some old articles I have archived from when I wrote my thesis and also intend to delve into the history of 'women as property', the 'sexualization of women in the fashion industry' and the concept of fetishes, i.e. shoe fetishes and the notion of possession; all very interesting topics that I can't wait to dig into!