On other Gender Neutral Fronts

While I'm constructing the OutHouse, I've also been working on other pieces for the Gender Neutral exhibition including the bucket for the OutHouse (I mean in theory you have to pee somewhere, right?) 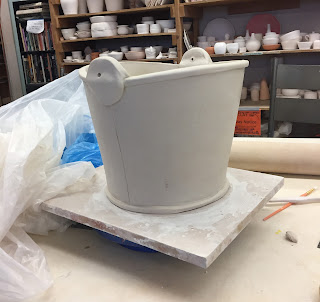 This is the second version as I blew a hole in the first bucket by doing a not so great job of glazing! When building this one, I made sure I made the sides thicker and I changed up the part where the handle will be attached, so actually it was a good thing I blew up the first bucket as I'm like this one much better! Currently it is being fired, assuming that goes well, I can glaze this one - doing a much better job this time around and it will be complete about mid February.

I'm discovering that making these large vessels takes much longer to complete than it did when I was making the Cupcakes...

Once I finished building the bucket, it was then onto my Chamber Pot series, or rather the Pot to Pee In series! Prior to indoor plumbing, chamber pots were used to go to the bathroom at night when a trip to the outhouse was less desirable. After researching various pot designs I came up with my own variation. 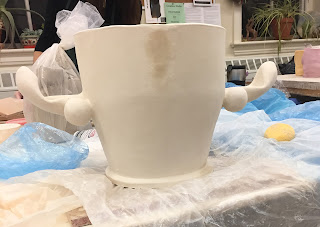 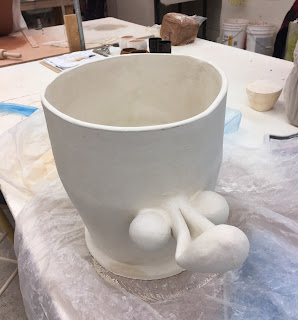 This is chamber pot #1, first made out of porcelain and then I made a second one out of B Clay as porcelain was not proving to be cooperative in this endeabor. What you see here is the porcelain version which is also in the process of being fired. The B Clay one is still in the drying stage. 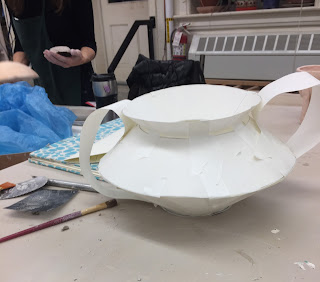 This is an example of my paper template for Chamber Pot #2. Because I'm not the greatest at math, I'm discovering I'm having a hard time figuring out the angles of the pot sides. I did find a free program on the internet that can formulate and print out a basic cone template but then its up to me to figure out how to piece it together to make the pot.

I've begun construction of this one in clay but it is still in process. It will be a little shorter than the first one. As far as the third one (it will be a series of three pots total), it is still in the sketching stage. Soooo.... that's it for now!

Progress Report on the OutHouse

Although the cold weather has made working on the OutHouse a challenge (shop tools and cold fingers don't go well together), I am coming along on the project! 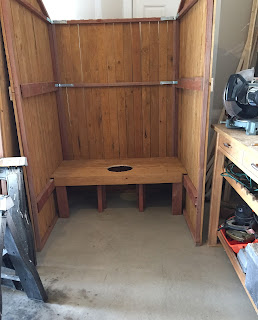 I did some tweaking on the front of the bench by adding an extra panel so that it appeared a little more finished visually. 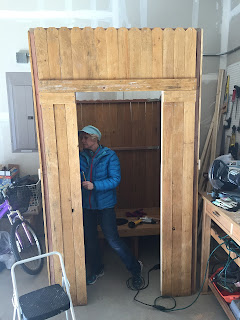 Here I am installing the front wall of the Out House. It was a little tricker than the other walls because the front is constructed a little differently with the support beams and the door frame. 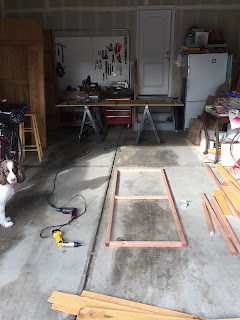 Next up is the construction of the door frame. It was a relatively easy project although I must say I managed to strip a number of screws in the process - it seems the wood gets harder the longer it sits and dries out. 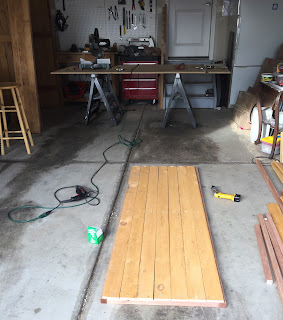 Interestingly even though I measured and measured again the door seems to be a wee bit wider at the top than the bottom so placing the panels involved some creative spacing... needless to say this OutHouse will have excellent ventilation! 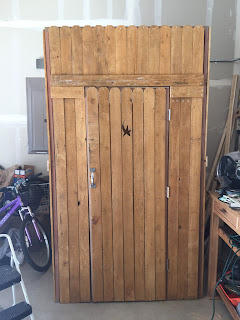 Door is installed! I had to take it to RMCAD prior to install so my assistant and I could cut the Moon/Star into it - I created the template which he then transfered to the door and cut! The handle and the hinges are stainless steel. 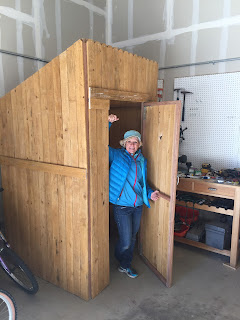 And the door works!

Posted by Kim Putnam at 3:51 PM No comments:

Now that the holidays are over it's back to work in the studio or in this case the garage! Monday was the warmest day of the week at a whooping 50 degrees, well at least when I started! The following images show the various steps of the building process.

I first started with the bench itself, then added the supported on the bench followed by the cutting of the hole and adding of the support legs. I'm thinking I will add a beam or two along the front to finish off the front visual.

Next up (next Monday which is the next warmish day ... again in the fifties!) 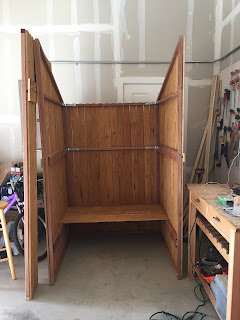 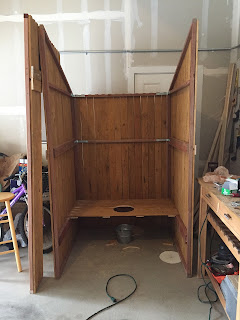 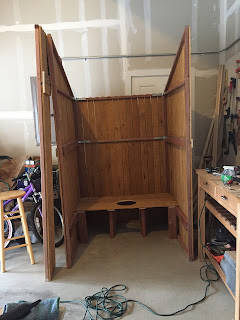 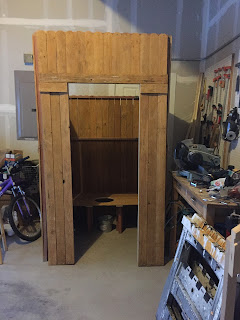 Step 4
What the OutHouse will Look Like when the 4 Walls will be Connected!

Posted by Kim Putnam at 8:00 PM No comments: