Update on my adventures in Ceramics

Its been a while since I posted any progress news on my adventures in Ceramics so I think this is due. I'm continuing to work on my cupcake series, I now have 6 cupcakes that pass my intense scrutiny... I will take a picture of these which are currently at home in the studio. The two below are in progress. 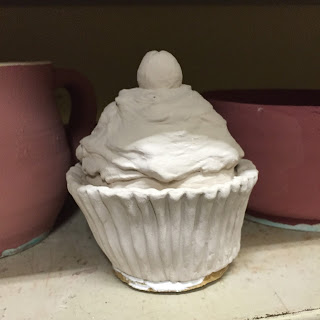 This one has both the white underglaze and the clear over glace and is ready for the final firing. 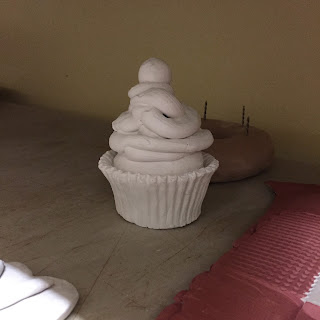 This little beauty I'm calling the Poop Cake because my instructor said the icing looks like a pile of dog poop! It has the white under glaze so its waiting to be low fired. Then I will put the final clear over glaze on it and see if it makes the cupcake cut! The icing is the way it is because my icing bag and tip was on its last leg... I had to retire both after class. Considering the number of cupcakes I still have to make, I thought it was time to invest in good quality decorating/icing tools so Wednesday I took a detour to Hobby Lobby before my Life Drawing 1 class (the class I am teaching) to pick up the goods! In theory there should not be any more Poop cakes!

With Spring finally starting to come round (of course we are predicted to get a major intense snow storm this weekend but then again that is Spring time in Colorado) I had Andy pull out our fountain a couple of weeks ago... we got the thing going but the sound was just not happening for me! I think there is a flaw in the fountain design. I thought so last year as well and tried to fix it with the addition of river rock but it still didn't sound right so this year as an experiment I replace the river rockes with a small glass. Not only did it sound better but it totally stopped the splashing of water out of the fountain, but a new problem appeared - the glass looks ugly! It was not aesthetically pleasing in any way, shape or form! Sooooo..... I decided to fix that too using my newly developed clay building skills! I present to you the Lotachoke! 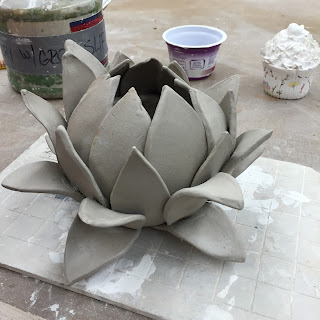 I'm calling it the Lotachoke because when I had the first layer of petals on my instructor said it looked more like an artichoke - it is supposed to be a Lotus flower! Being a quick thinker I came up with Lotachoke a hybrid bred, a rare and perhaps mythological flower found only in the basement of the Art Students League of Denver!  I'm actually quite please with it (now if only I can avoid breaking the petals)! It needs to dry a little more and then it will be painted with a cadium yellow underglaze, with perhaps a touch of orange (colors found in the fountain) then low fired; then I will put a clear over glaze over it and high fire it. After that, the Lotachoke will be installed on the fountain and we will have the tranquil sounds of a waterfall in our secret garden (aka the side yard of our house on E. 27th Ave.)