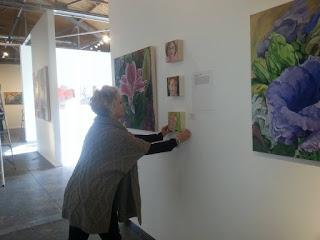 I spent the morning hanging work at Core New Art Space where we are bringing in the new year with a Member's Show. Rather than show work I'd already shown during the year, I decided to bring in new works even though they were small. Here I'm shown hanging 3 portraits from my American Beauties series that I'm working on (well working on and off... its an on going project) over the next few years. Next to the portraits I included a brief description of the project with a note to viewers inviting them to participate in the series if they happen to be women 60+ years of age... it works! One of my fellow members read it and volunteered! So with her I have 3 more models in the Q... but I need to get the Sinful Delights painting finished and my One in Eight installation farther along before I pick up the portrait brush again. Its crazy, I've got 5 projects going, 4 of which are series.... so a lot going on but nothing finished, CRAZY!