Reboot on the Cupcake series 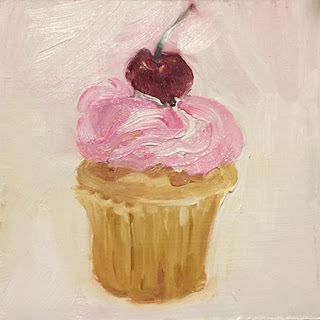 So after weeks of struggling with my cupcake series, you know when something just doesn't feel right, I was ready to just chuck it in but again a colleague (and friend) validated the concept so I opted not to but then what to do... I've not been happy with my baked goods thus far, I felt like I was trying to force a round peg in a square hole and finally just had a total artist block (hate those!)... then a dear friend (Lisa Kennedy) suggested, why don't I get a real cupcake, light it with strong light and paint it... then manipulate it from there! Lisa you are brilliant! The above study is the result of this experiment... its the first decent painting I've done in months (not since my mouth series)... gees I was beginning to think I couldn't paint anymore, that I'd lost the artist touch with oils!

With this success, I started thinking about the vision I had for the series as a whole and have decided to reboot the series, starting over with a fresh approach using this little gem as my guide! Instead of painting from my imagination per say, I'm going to use that imagination and manipulate the actual cupcake and then paint that! Forget the writing on the background (again square peg in round hole), instead the names will be the titles of the work (allows for more ambiguity) and then I will speak to the names as a whole in my artist statement! Finally it is starting to feel like a natural flow again and not something forced which is what it has been feeling like since I picked up the brush for this series.... man you'd think after 15+ years of painting I'd have learned, the art doesn't work if its forced! Anyway... feeling renewed, will be taking the past disasters off the stretcher bars (no sence in wasting perfectly good bars on crappy paintings), I have ordered more canvas from Dick Blick and will begin again... Soutine painted his meat series from real raw meat, if it worked for him then it will work for me... the challenge for me will be to make sure my girls don't eat my models as they've threatened to do already!

Posted by Kim Putnam at 6:52 AM No comments:

Work in the studio continues....

So I thought I'd share a gallery of photographs that show my creative process... this one focusing on the new diptych Sweater Stretcher... sketches, color studies and a wall of thoughts... I've ordered my 30 x 30 inch stretcher bars and have stretched one canvas and toned the canvas a lime green of which I will paint over with a mixture of impasto and white and write my second set of boob names! I think I like this text set more than the last one. They are fun and crazy and will be a good compliment to the color palette I've chosen!
Posted by Kim Putnam at 7:08 PM No comments:

One in Eight progress 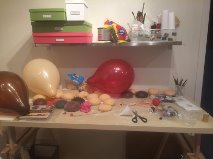 Not sure what's going on with the lighting in this picture... I'm continue to work on the 160 breasts in the One in Eight installation. Found another package of colored balloons to represent another skin color. I have about 21 breasts complete so far, this doesn't include the painting of the breasts. I'm going to get them all made and then paint the nipples. I've figured out that if I blow up the balloons and leave them for a day or two the latex stretches so that I can make a larger breast. This brings them closer to the size of the reconstruction implant.
Posted by Kim Putnam at 1:31 PM No comments: 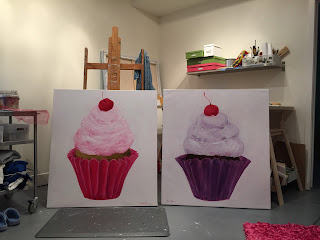 Sisters diptch is complete! It is the first of the cupcake painting series which is titled Huge Tracks of Land, thank you Monty Python! Sisters is one of a multitude of not so complimentary, often boarding on rediculously silly names that society has over the years given to women's breasts. The color scheme was my first attempt at painting in more or less a monochromatic palette and took its inspiration from the Putnam sisters - their favorite colors are pink and purple. Having spent many an afternoon at the Stapleton pool with the girls and many a child from the neighborhood community, I also drew from the way parents (moms?) dress their kids, often in identical clothing with perhaps the only variation being the color. Yes, my paintings pull from my surroundings and are influenced by my environment but then again so was Mary Cassatt's work so I think I've placed myself in good company!

Next up ... Sweater Stretches!
Posted by Kim Putnam at 9:51 AM No comments: